We the People of the United States, in Order to form a more perfect Union, establish Justice, insure domestic Tranquility, provide for the common defence, promote the general Welfare, and secure the Blessings of Liberty to ourselves and our Posterity, do ordain and establish this Constitution for the United States of America.

The shooting of Steve Scalise and three others in Washington DC was the 157th mass shooting in the United States. Followed closely, as in, the same day, by two others.

Now they know, I thought to myself.

Now they know what it’s like to be afraid.

Now they know what it’s like to be afraid where they were never afraid before.

Now they know that they can be shot at at any time.

On a ball field, in a grocery store, in a nightclub, at the movie theatre, in school. Now they know.

And, indeed, there were immediate calls to “tone down the rhetoric” from both the left and the right.

My own piece of shit congressman sent a note out, declaring solidarity with his fellow thugs, and saying “I want to reiterate Speaker Ryan’s statement, an attack on one of us is an attack on all of us. In the midst of partisan tension, harsh language and political criticism, the violence we experience made us stop, slow down, and remember that no matter what side of the aisle we are on or what policies we agree or disagree with, we are all Americans working every day to serve those we call friends and neighbors back home.”

Really? I would never, not in a million years, have known that Jason Smith considers liberals as people, much less a friend or neighbor. I like evidence, and I have seen none.

He goes on to say, “As we move forward from this horrific event, we must not forget that what makes America great is that we are all different. We cannot allow those differences to bring anger and violence to our doorstep and threaten our democracy.”

Actually, I would argue that our differences are exactly what is bringing the anger and violence.

In the alternative world the republicans live in, the more guns, the better. The more firepower in the hands of mentally ill or violent people is good. They keep writing laws that say so.

More than a thousand women have died so far this year at the hands of their husbands, or significant others. Not all by gun, but many. This is not considered “an attack on all of us”, though.

And, at this moment, a group of rich white men are writing a new health care bill in a back room in secret. It promises to be even worse than the awful bill that came out of the House. 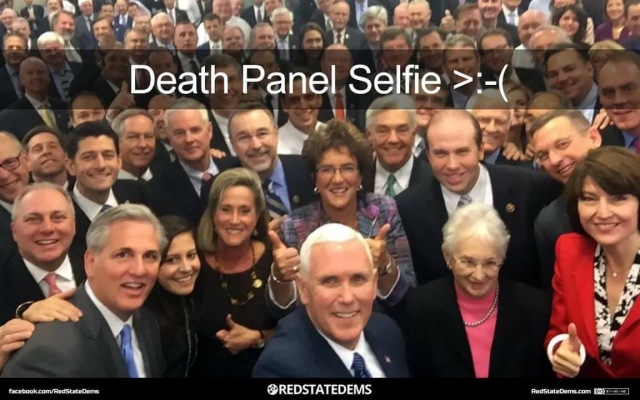 Yes, that’s right. That’s one of the many pictures of republicans celebrating taking health care away from 24 million people. My piece of shit congressman is just to the right and behind the religious fanatic that is our VP.  Of course.  Steve Scalise is also smiling and happy and he’s just in front of the monster from Wisconsin.

Frankly, I’m surprised more congress critters haven’t been shot. They have, essentially, declared war on us.

That’s right, I said it. The republicans have declared war on poor people, women, people of color, senior citizens.

According to republicans, the only people that matter are rich white men who contribute to their campaigns.

If you don’t fall into that category, you don’t matter. You can die horribly.

I don’t think I’ve fallen off the deep end to believe this. Just look around. Look at the state of Texas, for instance. They are legislating what health care women can have. If you have a problem pregnancy, where something has gone wrong with the fetus, you are almost condemned to die. Sepsis is a bad way to go, but republicans really don’t care about the woman.

And, look at Flint. How long have they been without clean water? Years! I am totally amazed that no one has taken Rick Snyder out. Seriously, it’s absolutely stunning that people have not killed that guy.

Now, I am aware that this is not a popular opinion. Everybody in power condemns violence. Unless, of course, it’s the police doing the killing or maiming. Then it’s okay. And who do the police protect? Rich white men and their property, for the most part. Just look at North Dakota and what that state did and is doing to people who tried to non-violently protect their water. Please enlighten yourself by checking out Tiger Swan.

It’s open season on Americans who don’t matter. I made the predictions at the beginning of the year and I wasn’t at all wrong. Social security, medicare, medicaid, the Affordable Care Act, food stamps…..all the safety nets are under attack. Here in Missouri, our governor is attempting to take away the $10 an hour minimum wage.

Congress has been “borrowing” from social security for so long that they can’t pay it back. Too bad for all of the people who have paid into the fund for years……screw you, Congress is saying.

It’s nothing short of remarkable. The people we “elect” to represent us, hate us.

I can prove that statement. Just check out the letter my “representative” sent out that I shared with you. He hates liberals. Plain and simple. Hates us.

I feel threatened as hell. I’m 60 years old, on the cusp of retirement, and health care is about to get a whole lot more expensive. My government, my “elected” officials, want me to die as quickly as possible. They don’t care if we go bankrupt. They don’t care.

And, we are supposed to sit back and just take this?

Violence is never the answer, according to popular opinion. Self-defense, though, people understand that.

You come to my house and threaten my safety, I’m allowed to kill you.

That is exactly how I feel as I watch these rich white fucks vote to take away everything that life depends upon. You are killing us, legally. Because you make the laws.

Truly, it’s become a war. A war on Americans. A war on anybody who isn’t rich. That isn’t hyperbole, it’s fact.

It’s going to get really interesting, now. As more and more Americans get sick and can’t afford to treat their illnesses, they will have much less to lose. People with nothing to lose are extremely dangerous.

Good luck, Congress. I hope more of you pay for your votes in a really painful way. I don’t offer one thought or prayer to Steve Scalise. I think he got exactly what he deserves.

I can, and do, feel enormous pain whenever there is a shooting of people who don’t have a personal security detail. The men and women at Pulse nightclub. The people at the Aurora movie theatre. The children of Sandy Hook. I feel that pain.

I can’t feel one bit of love or sympathy for a group of people who sit around, taking things away from others. I can’t. Congress has evolved to a gang of bullies who think they are entitled to what the rest of us aren’t. They certainly are doing absolutely nothing to either “insure domestic Tranquility” or to “promote the general Welfare.”