It might have been our second summer here in development hell when a couple of house finches elected to build a nest in some clematis I have growing on a trellis.  Of course, I didn’t know they were house finches at the time.  But they were entertaining and so I bought a couple of bird books and started to educate myself.

I’m not a lifetime list kind of birder.  I just enjoy watching whoever is around at the time.  Right now, as I write this, a mother grackle has her fledglings out in our bird room.  Fledglings are 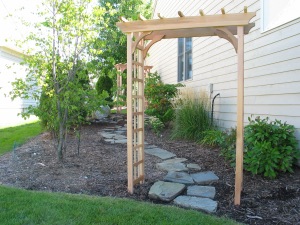 This was taken at least 5 years ago.

a hoot.  You can practically see their thoughts:  Is this food?  What’s this water here?  Oh, I can take a bath in this!

But because of those house finches, we built the bird room.  I’ve watched the Hawthorne tree grow and support robins, cardinals, blue jays and cedar wax wings.  I can’t even describe the pleasure I get from that, watching wildlife survive for another day because of something I’ve done.  I feel like I’m giving something back; yes, I do owe something on this physical planet.  Responsibility is not a dirty word.

These living creatures help me see relationship and connectedness.

I’ve written about Squatty in passing and I’m still missing her.  This is the third summer she’s been gone.  For a toad, she liked attention.  She always made sure I knew she was around.  It became habit to check the toad abodes to see if Squatty was home.  She’d pose for pictures and just hang with me.

Squatty in her abode.

I have seen Junior, twice, in one of the abodes this year.  He’s very shy, though.  I look for him in the beds all around our house, but I see him rarely.  He showed up last summer.

Just the other evening, as I was closing the shades of the window into the bird room, I saw Kermit sitting on a rock, and another green frog just across from him.  I hadn’t seen any of them since their pond mate was brutally murdered two weeks ago.  It was great to see them.  And then a third frog made her presence known.  All is well in the pond.

The hummingbirds are always thrilling.  We don’t have the variety – just the ruby throats – but I always get the male first.  Francine lags Louis by at least a week, but both are here now, taking turns at the feeder on the deck.  By late August, Louis will be gone, but Francine will bring her juveniles to sip nectar before they embark on their long migration.  My sense that these are the same birds seems possible as the species does return year after year to their favored spots.  I’m honored to be among them.

This year, robins have built a nest on a beam under our deck.  I didn’t even see the nest until two eggs had already been laid.  Both the male and female work together to bring up a family.  I try to respect their space, but they startle every time I walk out onto the deck and fly to the Tulip tree we planted about five years ago and harangue me to leave them alone.

Robins are natural comedians, at least for me.  Watching them bathe is hilarious.  They get nervous if I stand under a tree where they are roosting.  Last night, I took the dog out for her last elimination opportunity.  It was twilight and she’s sniffing for pee mail.  Pretty soon, I hear the signature sound of an irritated robin.  She flies out of her roost and stands on the ground at a safe distance and, staring right at me, proceeds to bitch me out for disturbing her.  I laugh and tell her to chill out.  I didn’t even know she was there until she had a hissy fit.  Go back to bed, Miss Robin.

Then I look around nervously.

I had said this out loud.